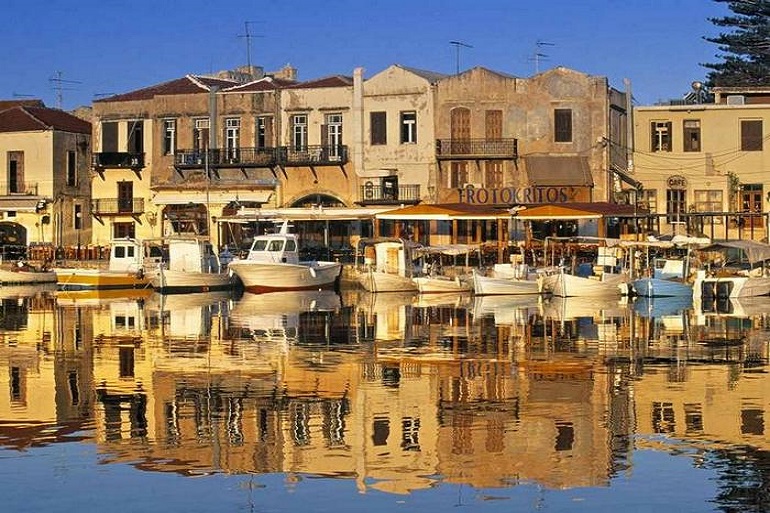 Rethymno is located in the north end of the prefecture, built by the sea and is a city with many faces. Rethymno or Rithymna as it was once called has been inhabited since the Later Minoan III period. Nowadays, it keeps the elements inherited by its history (from antiquity up to now), preserving at the same time the characteristics of a modern city. You can reach Rethymno by boat from Piraeus or by plane from Athens to Chania and then drive 60 km to Rethymno.
Bus services are daily and often to all Cretan areas while the north road network is convenient for a relaxing journey.
Rethymno combines the conveniences of a large city with the beauty of an old town. Both elements will mesmerize you.
Rethimno
Venetian Lotzia, a beautiful building of 6th century which now houses the Public Library, is located in the old town at the end of Paleologos Street. Lotzia building was the gathering place of noblemen feudal lords where they could discuss issues concerning economy, commerce, politics, etc. At the same building they could play lucky games while its arcades were used by representatives for announcing state decrees.
The building was later influenced by the Turks who turned it to mosque, covering the arches and leaving just one door open. In the west side they annexed a minaret.
If you walk along Vernardos Street up to its end, south of Petichaki square, you will end up in Nerantze mosque. The building operated initially as Venetian church, dedicated to Santa Maria and later (1657) it was turned to a mosque by the Turks.
During this transformation the Turks annexed a roof with three domes and the highest minaret in Rethymno.
It is worth to go up Paleokastro hill and walk in Fortetzza. Fortetzza is the fort of a zone of fortified works established during the Venetian occupation. Their construction lasted seven years (1573-1580 A.D.). The exterior aspect of the walls is low but wide with such an inclination that could protect its interior from enemy bullets.
The fort’s central entrance is in the east side through which you will enter a dark arcade and proceed to the interior of the castle but when you pass it you will see the sunlight again. The first building you will see is the warehouse of the artillery which nowadays operates as an exhibition hall.
A bit further is Aghios Ilias rampart and the small, amphitheatrical and semi-circular theater Erofili, which is now used for cultural events of cinquecento character during the summer period. Sultan Ibrahim temple dominates there, while opposite the mosque you will see the ruins of Retouri mansion (Venetian prefect).
Further down and on your right you will meet Aghia Ekaterini church built in the end of 19th century. If you follow the pathway you will see the semi-underground warehouses of the northern wall and a bit further you will meet the Counsels' mansion, the architecture of which reminds us palaces of cinquecento type. Approximately fifty meters down you will see the gunpowder warehouse which is a small stone building with pyramidal roof.
In the eastern end of the castle you will see a small Russian church (Agii Theodori) which proves the existence of Russian troops in the period of 1897-1909. The tour of the castle ends on the east side of the wall.