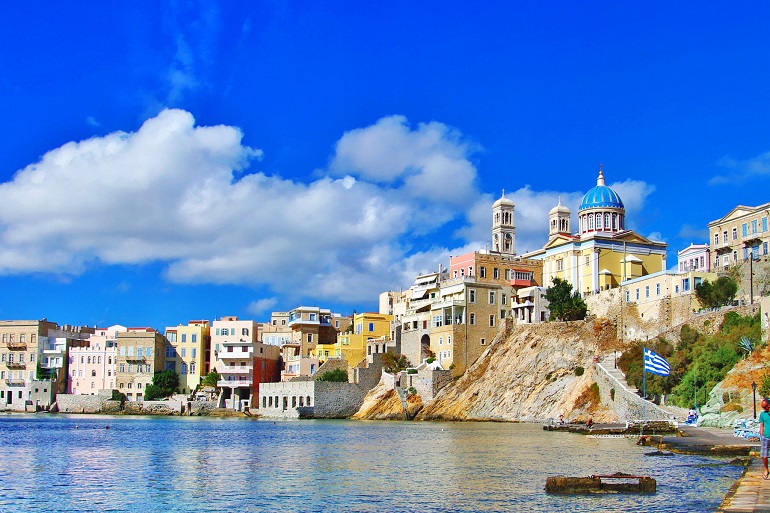 Syros or Syra is the geographic, administrative and commercial centre of Cyclades. With its unique historical path, its particular cultural wealth and its imposing natural environment, Syros emits today an incomparable radiation.The traveller sees coexisting in a harmonious and simultaneously fascinating way the traditional element with the cosmopolitan, the medieval with the modern urban, the Cycladic with the neoclassic, the catholic historical tradition with the orthodox.
Syros has an extent of 86 square kilometres and more than 20.000 residents, constituting the largest demographic island of the Cyclades.
Capital of Syros, and of Cyclades, is Ermoupolis, a marine city that fascinates any visitor from the very first moment, with its impressive two-storied and three storied neoclassical mansions, stretched out around the big natural harbour of the east coast, up to the two hills that dominate the city, with the catholic church of Agios Georgios and the Orthodox church of Anastasi at the top.
Ermoupolis was created in the Revolution of 1821 and fast developed into a big centre of trade between east and west. In 1826, residents of the new city adopted the name Ermoupolis dedicating it to the “kerdoos” Ermis (Hermes the profitable). With the passing of time, industries, workshops and Neorio shipyards were created in the city. The economic development of Ermoupolis resulted to a cultural blossoming and, thus, in the city of “kerdoou” (profitable), but also scholar Hermes, took shape for the first time a genuine Greek urban class. This is also seen in the architecture of the new city, where the style created, conforms with the beginning of romantic classicism and is strongly influenced by western models.