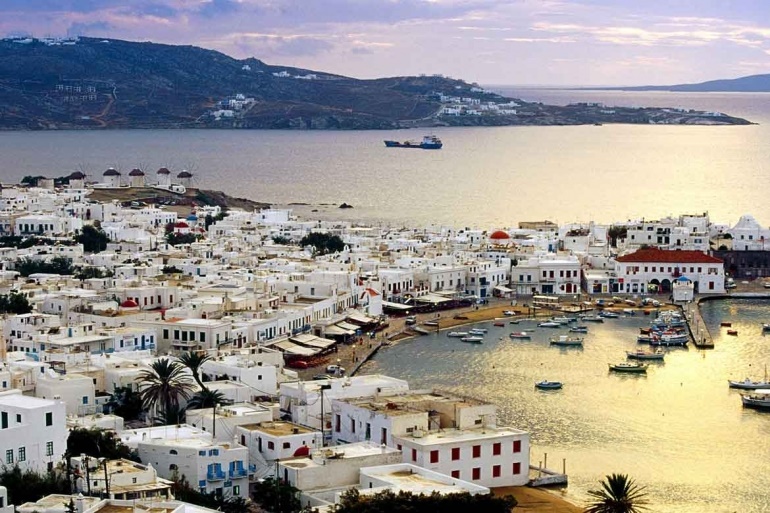 Mykonos is found in the heart of Cyclades. It is an island with a double personality: it is one of the most picturesque Cycladic islands, with picturesque streets, white houses, chapels and windmills, and simultaneously one of the most known tourist destinations, which has been distinguished at a world level for its cosmopolitan character.Clubs, bars and beaches of the island have all been filled for many decades with tourists, eponymous and anonymous.

Mykonos is an island that guarantees that its visitors will have fun, no matter if they are worshippers of night life and intense emotions or the kind of travellers that wish to get to know the place, to visit sights such as archaeological sites, monuments, churches, picturesque settlements and familiarize with the tradition and life of the residents. Mykonos offers all the above and covers all expectations. The visitor of Mykonos, can enjoy a unique natural environment. There are beautiful coasts, white rural houses, windmills and small pigeon houses, but above all, friendly and smiling people. All these in combination with the transparent and cool summer atmosphere, and the colours of, grey, white and azure in all their nuances, endless stone fences, the prickly pears and the reeds, justify why Mykonos, became the beloved place of artists, but also famous persons of global fame.

The entire cluster of Mykonos - Delos - Rineia, officially has been characterized as a “region of particular natural beauty” and is protected by special legislation.

Capital of the island is Hora or Mykonos, that enchants the visitor from the first moment with its architecture. Walking in whitewashed paved streets, between white houses, with their colourful doors and windows, their staircases and escalations, one has the impression that he is found in a labyrinth but friendly space, where only optical contact with the sea can provide direction. Furthermore, on a low hill, are the imposing Mills, facing the sea. In the harbour of Hora, a small colourful fleet of fishing boats and boats, supplements this unique picture.

The fame of Mykonos and the great number of visitors, with important personalities from all over the world among them, have created an important commercial change in the island. Thus, in the streets of Mykonos, with the Matogianni Street being the most commercial one, you can find clothes, elaborate jewels and objects of art in the shops. It is not an exaggeration to say that here, international fashion tendencies that are to prevail soon are expressed many times.

In the scattered coffee houses, bars and restaurants of Hora you can enjoy coffee, ouzo and a number of other tasty dishes, observing the colourful crowd that walks in the streets of the city.

In Mykonos you can visit the church of Panagia Paraportiani, with its original architecture, but also hundreds of other smaller churches, scattered in the slopes, the museums in Hora and the monasteries.

Hora constitutes also the base of operations for discoveries, with regular itineraries of buses or other means towards the remaining beauties of Mykonos, the picturesque hinterland and the spotless beaches. Among the natural beauties of the region, we can distinguish, the Choulakia beach, with its large pebbles, the granite shapes with improbable forms on the south, (Halara, Plintri, Lino, Lazaros etc.), the majestic capes among hospitable coves (Drapanos , Divounia), the abrupt coasts in the northern part of the island (Fanari, Panormos etc.), the red rock of Tragonisi, the strict landscape of Aleomantra etc.

Finally, if somebody visits Mykonos in the winter period and seeks to approach and discuss with residents of the island, he will realise that in their majority, they remain simple, effervescent , hospitable, and that they always find time to maintain their traditions and their customs.